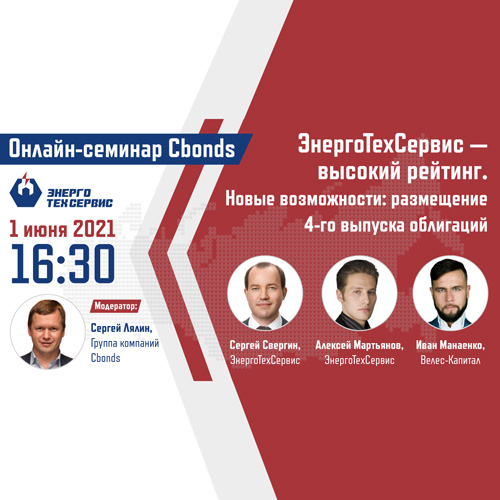 At the Cbonds online seminar, our company presented its fourth bond issue, which is scheduled to be placed in June this year. EnergoTechService has been present on the debt market since 2019, but the next bond issue has become a serious step forward for us: after receiving a sufficiently high rating from ExpertRA at the RuA- level with a stable forecast, the company will significantly expand the its potential  base of investors.

“EnergoTechService is not a new company as an issuer on the market,” said Sergey Lyalin, CEO and founder of Cbonds, while opening the online seminar. “The company has been on the market since 2019. The coming issue of its bonds will not be simply following, but it will become, may be said, a quantum leap, because in 2019 the company came with a loan for 250 million rubles, in the past – for 250 million and 500 million rubles. Now the company plans to come out with a loan of 1.5 billion rubles. Taking into account the fact that the current issues of the company are traded somewhere under 9.5%, it may well turn out to be an interesting placement in terms of a combination of a high rating and a fairly high yield. Therefore, I think the issue will be of interest to both institutional and private investors,” he said.

During the seminar, the director of EnergoTechService, Sergei Svergin, noted that the main activity of the company is power supply of facilities using gas piston, gas turbine, diesel power plants and “green” energy.

“Our main service is to provide energy to industrial consumers. Our role, as an active participant in the distributed energy market, is to analyze the needs of the consumer, his technologies, his risks and financial capabilities, then locate the power plant as close to him as possible and provide a comprehensive service. And it doesn't matter where the consumer is – in Chukotka, Yamal, or in the center of St. Petersburg. We are constantly looking for new niches, new customers who have a deficit in this service, and we provide them services of decent quality,” he said.

Sergei Svergin emphasized that EnergoTechService proved by its own example that electricity can be cheaper than grid power. In addition, thanks to the company's technological solutions, the consumer (the main customers are Gazprom Neft, Bashneft, Arktikgas and a number of other oil and gas companies) can save up to 30% on drilling.

Alexei Martyanov, head of the investment attraction department at EnergoTechService, spoke about the history and strengths of the company. He noted that the issuer is among the top-3 of largest independent Russian companies in distributed power generation using associated petroleum gas. The company has been successfully operating in this market for over 18 years, its staff exceeded 900 people, and its revenue from 2002 to 2020 increased from 15 million to almost 6 billion rubles. The current portfolio of contracts exceeds RUB 30 billion.

“The current strategy of our company, in my opinion, is very successful. This is evidenced by attractive financial results and an understandable growth strategy – the average annual growth rate of revenue over the past 3 years is 30%. We carry out exploitation and generation projects. Operation is where EnergoTechService started its activity, in this case we work with the customer's equipment. When generating, we work on our own equipment. In the company's development strategy, we plan to increase the generation segment to approximately 80% by 2023. The advantage of generation projects is a relatively higher margin, long-term contracts and a high probability of their prolongation,” explained Alexey Martyanov.

He also noted that since 2018 EnergoTechService has begun to actively invest in gas-piston generation, which is a significant capital expenditure. Accordingly, the volume of borrowings in 2018-2019 in the company increased, but EBITDA grew faster. If in 2018 the net debt / EBITDA ratio was 3.5, and in 2019 it was 3.2, then in 2020 it was already 2.2. Thus, the investment has shown efficiency and return.

The main parameters of the next issue of the issuer's bonds were introduced to the participants of the Cbonds online seminar by Ivan Manaenko, Director of the Analytical Department of IC Veles Capital.

He clarified that this is a four-year issue, the volume of attracted financing within the framework of which will be 1.5 billion rubles. The coupon period, as for the previous issues of the issuer, will be quarterly. The coupon rate in the current indicative is at the level of 9.9–10.1%, the yield to maturity is transmitted 10.27–10.5% per annum.

The bonds provide for an amortization schedule of 6.7% starting from the 5th coupon period. Remaining maturity – in the region of 26% after completion of bonds circulation.

The loan has already been registered and included by the Moscow Exchange in the third level, respectively, in the “Growth Sector”, like the previous issues. It is supposed to be placed by open subscription with the formation of the book, which will be opened on June 8. The technical placement is scheduled for June 10th. Organizers: Veles Capital, ITI Capital, SKB-Bank and Sovcombank.

“At the moment, the structure of the loan assumes equal repayments, starting from the second year of circulation with a residual payment on the day of the bonds' redemption. After 3–4 months, the company will start receiving payments, and taking into account several new contracts, in about a year it will begin to receive a stable cash flow. This will allow to pay off the loan and not postpone everything until the last moment. From the point of view of investors, such a structure is quite interesting, since it allows reducing the duration of the issue to 2.5, and in terms of the modified duration – to 2 and 3 years,” said Ivan Manaenko.

He also reminded that today there are three issues of EnergoTechService bonds in circulation. Two - 250 million rubles each, and the last loan – for 500 million rubles. The first issue is rather short, almost no longer traded. Two other issues, similar in terms of maturity and duration, are currently traded with spreads of about 390 bp. to the OFZ curve. The new issue, according to Ivan Manaenko, assumes either 420 bp or at the upper border of 440 bp. to the OFZ curve.

“The first issues were placed before the company received a sufficiently high rating in February 2021. Its importance, first of all, is that it allows investing funds not only for individuals, but also for financial institutions such as pension funds, banks and insurance companies. This is probably the most important point, because all those issuers that were placed earlier with the A- rating,  were placed for 150–100 bp. cheaper. EnergoTechService is one of the few representatives of the energy segment on the debt market. And although the company is still much smaller than its counterparts in terms of revenue and EBITDA, at the same time, in many parameters, for example, in terms of growth rates or profitability indicators, it is even ahead of them. Therefore, in our opinion, the loan certainly has a future, as well as a certain potential to reduce at least the price of this issue,” added Ivan Manaenko.

Andrey Bush, Executive Director of ITI Capital, also spoke about the advantages of the new issue of EnergoTechService bonds. “We really like the company's strategy. According to the plan, they are going to become more transparent, more public and grow together with the market, using all possible instruments for financing. Now the issuer has the potential to demand from institutional investors, which could greatly increase the liquidity of the securities issued by the issuer. Taking into account the small volumes of the issue and the quality of the issuer, the majority of investors in previous issues did not have a great desire to sell securities, so this caused low liquidity. Here we already see a large issue volume of 1.5 billion rubles. I believe that for a retail investor and a small institution, this will be more than enough to have sufficient liquidity,” he said.

Answering the questions of the participants of the online seminar Cbonds, Alexey Martyanov clarified that most of the funds from the new bonded loan in the amount of 1.2–1.3 billion rubles are planned to be used to refinance expensive loans that the company took in 2018-2019, when the rate was over 11%. So the issuer will be able to optimize its loan portfolio by 1%. The remaining portion of will be used for new energy service projects, primarily for the purchase of equipment. Thus, the overall increase in the company's debt will be negligible.

In conclusion, EnergoTechService did not rule out that in the future they will be able to enter the market with “green” bonds and enter an IPO, but they are considering such opportunities only in the long term. In the near future, the issuer considers it expedient to work on the rate level, as well as to make one large bond loan approximately once a year and a half.

The full video of the online seminar can be viewed on the Cbonds YouTube channel: https://youtu.be/23TaIudAem0.

EnergoTechService has placed bonds for 1.5 billion rubles on the Moscow Exchange