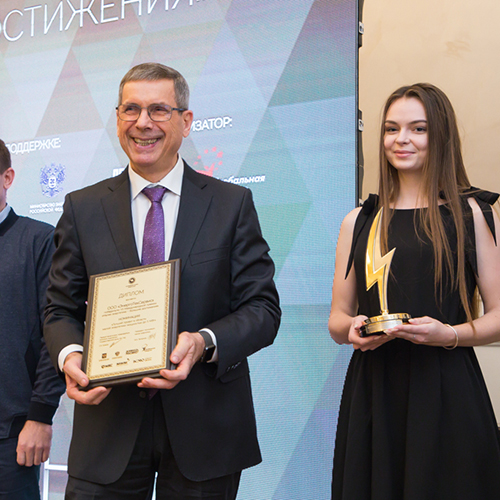 The solemn ceremony of awarding the VII International Prize "Small Power Industry - Great Achievements" was held on December 12, 2019 in Moscow. Representatives of more than 30 companies that reached the final from Russia and abroad, the media and the expert community arrived at the award ceremony in the capital of Russia.

52 projects implemented in Canada, Germany, Italy, Belarus, as well as in 16 regions of Russia were submitted for the competition. The applications were evaluated by the Expert Council of the Prize, represented by leading specialists and experts in the field of small distributed power.

For the first time, our company took part in this award in the field of small and alternative power. We presented our projects in two nominations at once: the first (“The best project in the field of small-scale power generation with a capacity of up to 5 MW”) and the fifth (“Investor of the Year in the Energy Sector”).

The first project - a gas reciprocating power plant for power supply of drilling operations at the Severo-Komsomolskoye field in the Yamalo-Nenets Autonomous District - attracted the attention of the members of the Expert Council primarily by its technological originality. For the first time in Russia, gas engines were used to power the drilling. The Expert Council was also impressed by the economic and operational characteristics of the new distributed generation facility: fuel costs decreased by 3-4 times compared to DES with zero duration of emergency outages and downtime. By a majority of votes, the Expert Council gave the highest award to our project.

In the Investor of the Year nomination, the Council made a unanimous decision in favor of our investment project - the construction of the Tyumen Power Equipment Plant and the formation of a GRPP rental fleet on its basis. The creation of a new plant capable of producing up to 80 units of modular power equipment per year, the grand opening of which took place in September 2019, was named by experts as the main event of investment activity in distributed power generation of the current year.

To the question of the journalists working at the awards ceremony how much the victory was expected, director A.A. Svergin replied that any competitor always expects to win, but "to receive two top awards in the fight against the world's strongest projects - it really came as a surprise." “We would like to thank the organizers for the efficient preparation of the international prize and the solemn awarding ceremony,” said Alexander Alexandrovich. “We are considering the possibility of becoming a permanent participant in this prestigious competition in the field of small and alternative power,” he added.

"Golden Lightning" will be an excellent addition to the positive reviews and letters of thanks from our clients, confirming the relevance and effectiveness of solutions implemented by EnergoTechService.

More information about the event on the website of the organizers of the award - follow the link.